If we were having coffee (or if I was having fruit tea), I would tell you that I have been really out of sorts this week.

It’s not major stuff (well actually some of it is), but I would hope that instead of dwelling on it we could sit and chat and put the world to rights. So much dialogue goes on in my head that it would be good to sit and just talk!

I cancelled our coffee date last week because things were getting on top of me, I took a rain check and rescheduled to this week to see if it would help my mood. It didn’t.

But then I got to thinking…What if being needy wasn’t an insult?

Surely it’s part of the human condition to want to be with someone else? We can tell ourselves that we don’t, but there is so much research out there that proves otherwise. Wait a minute…I used the words ‘want to be’ NOT ‘need to be’. Therein lies the difference.

So what else has been going on? Would you like another coffee? How much time do you have left?

If we were having another coffee I would tell you that I resigned from my voluntary position. I didn’t want to; I wanted to make a difference. I think I did for a while, but to make a difference even on a small scale you need other people to help you. Yes NEED.

I would also tell you that linked to that decision was the fact that my son is anxious again and that means that I don’t get much sleep. A fourteen year old will pace the house into the very early hours if he is troubled and anxious. He will lash out at you because you are the one who is always there, He NEEDS you.

He’s anxious because his safe place, with people he trusts, and activities that he enjoys, and is very good at, is under threat. Why is that? He’s anxious because the social situations are challenging him. He sees only black and white, he’s extremely literal. He can’t easily identify that he’s being bullied by someone because they might see him as a threat; they might resent his single minded drive to achieve. They most definitely do not understand any aspect of autism. 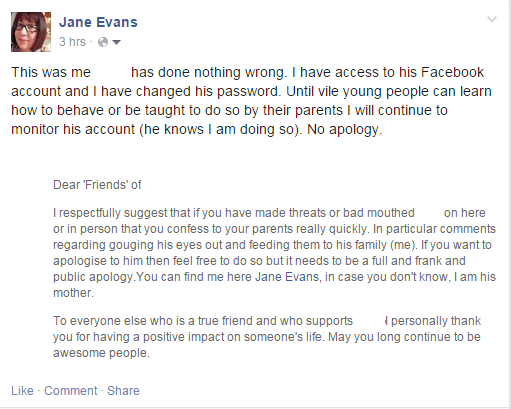 But then the messages of support for him started pouring in…

Matt’s a cool guy and if anyone is doing such ridiculous things we’re always here even though we don’t speak a lot!

People only need to bully if they are lacking I’m their own lives, it is no true reflection of Matt, as the entire Evans family is frankly nothing but kind and genuine.

You know how proud I am of you (from his sister)

Unite and be awesome my friends (my personal favourite comment)

…And so it went on and on without a negative comment amongst them. He NEEDED that. I NEEDED to see that happen.

So the way I see it is that there’s absolutely nothing wrong with needing other people. And thank you, I really needed that fruit tea and chat.

’til next time then xx

If you have any contact with a child with Autism you will be all to familiar with the term Social Story, but that’s not really what this post is about. However, these days, we all have a social story of a very different kind. The story that we set out to show the world via Social Media.

The end of my marriage coincidentally was the beginning of my social media story. It all began when my daughter wanted to have a Facebook account. The only way I felt comfortable enough to let her do that was by having one myself and ensuring that I had access to her password and could monitor and close the account down should I feel that it was ever being used inappropriately.

I quite like Facebook, or possibly did like Facebook. Life as a single parent is pretty isolating at times and more so when you have a child with additional needs and also have very little money for babysitters. It means you don’t get out much! Facebook was useful for keeping a virtual eye on teenage habits (the trick is to watch & not comment) it also enabled me to keep in touch with friends, some who lived many miles away and some who lived in different countries altogether. What I hated was the teenage idea that more Facebook friends meant that you were more popular.

I “cull” my Facebook account quite regularly, it might seem harsh to de-friend people, but if they are just there sitting on the periphery of my life and have no interest in interacting with me what’s the point? It’s the equivalent of the friend that never responds to your invites and doesn’t call you back. There comes a point where you have to let them go.

Linkedin is another social media site where I have had quite a lot of experience. I was asked by a friend to work with her on a project on Linkedin. It involved me working from home (perfect for childcare) and coincided with me needing to change my job from a well paid role with an IT company where I was so desperately torn between my new (sole earner) family responsibilities and my children’s needs for a more present, calmer mother. I’d also has a spate of illness which ended in me needing an emergency operation. Ill health focuses the mind to what really matters! Working from home it was then.

It was perfect timing, I was able to regroup my family, recover and work evenings. I grew a Linkedin Group from 1800 members to nearly 18000 in just under two years. I knew very little about the field that I was working in, but I did know how to talk to people and encourage conversations. Social Media conversations do not start themselves. You have to be present and you have to put the effort in. Just like in real life.

Jumping forward to the point where my son wanted a Facebook account, I considered that I was quite savvy in the world of social media. WRONG! This is the point where I became more wary of social media. Whilst any social interaction for a child with autism is seen as a step forward the pitfalls are so exaggerated. Bullying is more rife than in the real world as people are somehow braver (or more stupid?) sitting behind a keypad, keyboard or touch screen. It reinforces my instinctive belief that you  have to be a part of your child’s online activity. I have deleted content, blocked and reported (to the police at one point) a great deal of vile content from his Facebook. It’s very clear that many parents do not have a clue what their children are up to on social media. Yet it remains a valuable means of communication for any teenager in this world today.

My relationship with Facebook is love/hate. I love seeing updates from friends (real friends), I enjoy feeling that we are still ‘connected’. I hate a great deal of the ridiculous stories that get shared about on this forum and I mostly hate that children are not monitored in their online activities.

So what about Twitter? I find myself with a relatively new Twitter account mostly because said daughter has fallen out with Facebook and defected to Twitter, she has also moved away from home and it’s a nice way to touch base with her daily life and occasional rants. More than that though, I have found that I am in a odd place myself.

My long term relationship seems to have ended, my children are older and I am craving the company of like minded people. I know that I need to ‘get back out there’ but I am not really ready YET. At the moment  I am enjoying ‘meeting’ new people on Twitter. Sharing parts of my life that I have, until now, kept really private and finding out that my story, not just my social media story, resonates with others. I feel safer sharing some of my experiences with people who otherwise don’t know me but I also value the human interaction that has been missing in my life.

I am being myself and being totally up front and honest about who I am, with a view to learning that despite some challenges along the way, I know that I need to steer my story nearer to where I would like it to be.